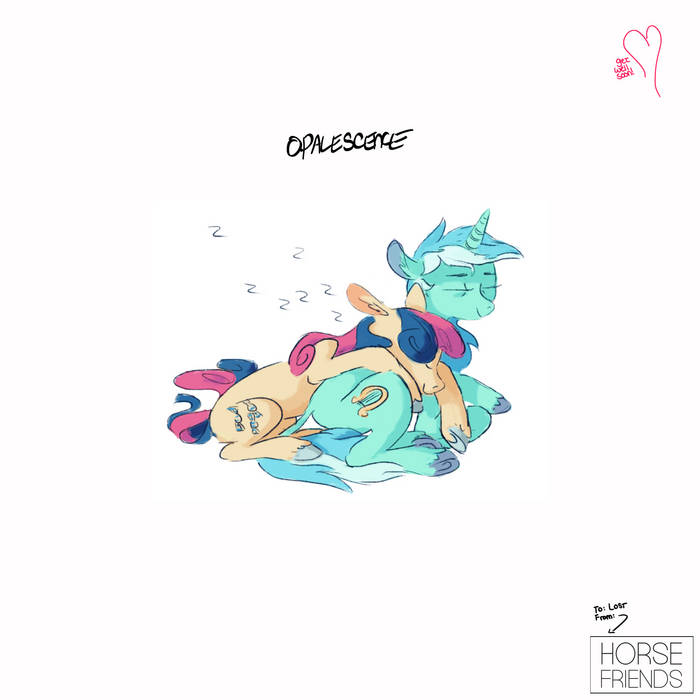 Firehoof Fave is sound bandit but just an awesome album <3

HawkFire Her voice is like... perfect for it. :P Favorite track: The Cosine Pitchshifterz - Beg For Me (ft. Wubcake).

Spectra A wonderful collection of songs for a good cause. Favorite track: Vylet - Your Worth (ft. Cadie).

Ataraxia Amazing music to help a prominent member of the community. Really happy I was able to help pull all of this together. It all sounds amazing. <3 Favorite track: Vylet - Your Worth (ft. Cadie).

erekohn Not only does all of the earnings go to a wonderful cause, it is filled to the brim with wonderful songs, all showing the musical skill of the brony fandom. Favorite track: Sound Bandit - Revelry.

THE FIRST $1,500 DOLLARS THIS ALBUM MAKES WILL BE SENT DIRECTLY TO THE LOST NARRATOR IN ORDER TO HELP PAY FOR HER MEDICAL BILLS. Any amount that is donated after that will be sent, in full, to The Jed Foundation.

Horse Friends brings a (shotgun) charity compilation album featuring many of our fantastic artists! Created in response to a member of the Brony community going into emergency surgery and needing assistance paying the following medical bills, OPALESCENCE is a compilation of 24 songs, ranging from the calm, chilling sounds of In Between by Ataraxia to the harsh, stomping, crowd-pumping beats of City Slicker (Internet Empire & Vylet Remix) by Feather. Without need for genre limits, the artists involved with OPALESCENCE have created whatever their mind desired in a short amount of time to serve one purpose; helping others.

If you would like to help pay for Lost Narrator's medical expenses (and a charity of her choice listed above), buy this album. 100% of the proceeds will be used as described, leaving none to the effect of personal gain.

The lyrics on track 9 were written by the band Skillet. We do not own the lyrics.

Special thanks to Sylver for extra help on track 23.

Hi, I'm Emmy. I play piano, compose/orchestrate, sing, and produce electronic pop music. Thanks for coming to check some of it out!

Bandcamp Daily  your guide to the world of Bandcamp

Featuring Plunky of Oneness of Juju and Coldcut & the Keleketla! crew.